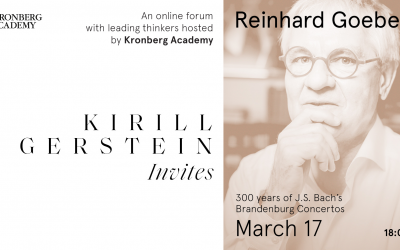 On Wednesday, March 17 at 18:00 CET, Reinhard Goebel will be presenting a seminar on the Brandenburg Concertos of Johann Sebastian Bach online on the series "Kirill Gerstein invites..." hosted by the Kronberg Academy. Here you can register for the event: Registration

The recording of the violin concertos by Franz Clement with Mirijam Contzen and the WDR Radio Symphony Orchestra (released by Sony Classical earlier this year) got awarded with the OPUS Klassik 2020!

Reinhard Goebel was awarded the "Dancing Shepherd" by the city of Würzburg for his long-standing involvement at the Mozartfest Würzburg. He is not only a professor of historically informed performances, but also implements it in an extremely lively and "often...

On June, 19th 2020, two recordings with Reinhard Goebel will be released: The 3rd recording of the cycle "Beethoven's World" (Sony Classical), including the Double Concerto for Violin and Piano by Johann Nepomuk Hummel (together with WDR Symphony Orchestra, Mirijam...

The musical life slowly awakens from its slumber. On 21 June Reinhard Goebel will conduct a ghost concert in the Würzburg Residenz with the Munich Radio Orchestra at the Mozartfest Würzburg. This will be broadcasted live on radio and streamed by the Bayerischer...

The recording of the violin concertos by Franz Clement with the WDR Symphony Orchestra and Mirijam Contzen  from the 5-part CD series "Beethoven's World" (Sony Classical) was awarded the German Record Critics' Award (Quarterly Critics' Choice 02.2020). The press...

“The recording with the Berlin Philharmonic cellists Bruno Delepelaire and Stephan Koncz is setting new standards.”

“Never have these concertos sounded so powerful, so dangerous, so modern.”

‘This is a record that drags you from the sofa, shakes you up, gives you a cold shower and lovingly towels you down … Beautiful music isn’t just made with the bow, but above all with the head. And here is the maverick Goebel, with a head of his own, who offers us Baroque music as timeless art: J.S. Bach, indestructible, young.’

‘Trumpeter Reinhold Friedrich takes the second concerto into the most glittering of tempi; in the fourth two recorders go into an embrace with the furious solo violin […]. One can almost feel the “virtually orgiastic recording sessions”.’

‘[He] succeeds in creating this inimitable swing […]. A listening delight.’

‘It’s as romantic as the legendary first recording, just as sensual, stormy, sparkling, resounding. It’s more radical in its tempi, but totally undogmatic as to the old big questions of instrumentation and tuning. And it goes a good deal further in phrasing, timbre, the transparency of the musical interplay and the interpretation of the tonal language.’